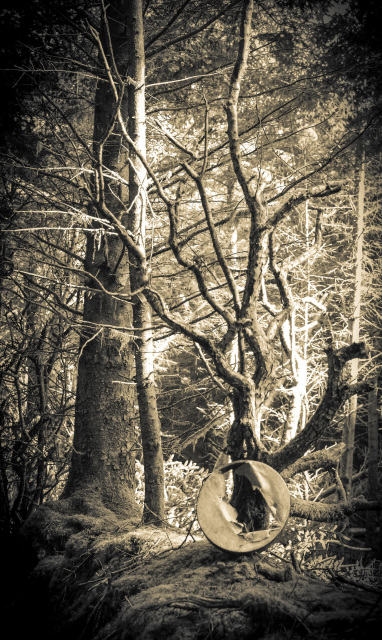 "“Bodhrán" is a 16" x 20" limited edition photograph, signed by artist, printed on Archival Moab Entrada Rag paper, nested inside a custom black wooden float-frame, wired and ready to hang. This is a photograph of an Irish bodhran nestled among an enchanted forest in western Ireland. Additional framing options available.

“All I know is what the words know, and dead things, and that makes a handsome little sum, with a beginning and a middle and an end, as in the well-built phrase and the long sonata of the dead.”

Simply picking up the drum and walking out the back door into the woods was how this photograph was taken in Ireland. I didn't know what I was going to do with the broken bodhrán, but as I sat among the trees, observable differences in the light, shadow and texture of the morning slowly revealed themselves.

A friend reminded me that activity is only really in service of that period of reflection at the end. There is silence built-in at the end of any sound, a reminder that perhaps we need to build and hold space for silence. Especially in these noisy times . . .

Abandoned spaces and conceptual figurative photography serve as the focus of Boston-based David Lee Black’s most recent series of photographs. Black has curated and juried several exhibitions and is a recipient of the Tullaloughan Fellowship in western Ireland. Artscope, Boston Voyager, Boston Herald and The Providence Journal are just a few publications that have featured his widely shown work. Black is represented by Galatea Fine Art Gallery in Boston, MA.