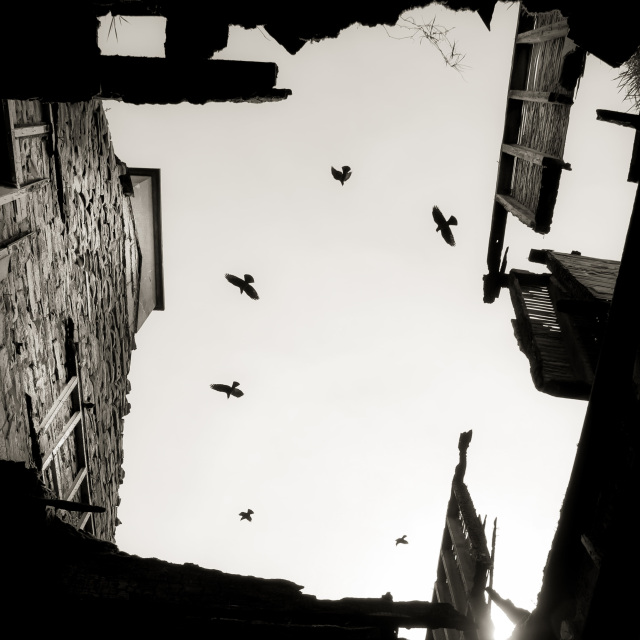 For Reasons I Cannot Explain . . .

I have returned to the abandoned convent, the Sisters of Mercy, each trip to County Clare, Ireland. Together with the late David Lang, some wonderful sculptural and photographic art has been created and shared from this site. On this particular occasion, I was standing in the kitchens of the convent and heard a whooshing sound overhead. Looking up with my camera, I bore witness to these jackdaws swooping gracefully in and out and over the ruins. I am returning once again to Ireland soon,and hope to say hello to my new observant friends.

There are many a rumor of the Jackdaw being a bad, or even an evil, omen that can indicate bad luck and bad fortune in your life. Generally, through befriending the Jackdaw totem the bad luck and bad fortune can be faced and worked through. The Jackdaw is in truth an omen to indicate what needs to be brought to attention in your life. With Jackdaw there are often powerful portends and premonitions ... as a familiar and totem guide, the Jackdaw makes an excellent companion.

The species may be the only animal aside from humans known to understand the role of eyes in seeing and perceiving things, according to a new study by Oxford University. While humans often use visual clues to communicate, it wasn’t known whether other animals share this social ability until recently.

﻿Abandoned spaces and conceptual figurative photography serve as the focus of Boston-based David Lee Black’s most recent series of photographs. Black has curated and juried several exhibitions and is a recipient of the Tullaloughan Fellowship in western Ireland. Artscope, Boston Voyager, Boston Herald and The Providence Journal are just a few publications that have featured his widely shown work. Black is represented by Galatea Fine Art Gallery in Boston, MA.